Tia is doing what she has to to survive– and no rookie cop’s gonna send her packing. But the curse that she’s fleeing isn’t so easy to shake. And while Tia learns the truth of it– and the trail of bodies gets longer– the threat John poses to her grows.

After probing her for information and growing to like the prickly girl, John can’t let her go, to vanish into the underground economy like so many other runaways.

As Tia and John’s unlikely friendship deepens, as the years show John the dangers of the hidden supernatural worlds converging, the secrets that divide them multiply and grow.  And failure to confront them may kill a lot more than their budding relationship. John may be forced to choose between his loyalty to the job, and his loyalty to the mission: protect and serve.

Because Tia’s curse isn’t done with them yet.

It won’t be until everyone Tia loves is dead. 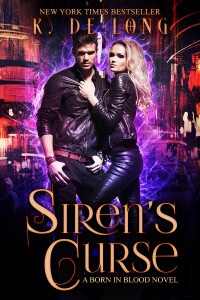 For most teenagers, a first kiss is cause for celebration. For Tiamara Groban, it’s the beginning of a nightmare.

The people Tia loves are dying. First her father, then her boyfriend. And it’s all Tia’s fault. Rather than stay around and hurt them, Tia takes to the streets. But Tia can’t outrun her curse.

But when a string of strange deaths lead him to suspect that a young runaway is the subject of a serial killer’s obsession, he’ll find himself thrown into the deep end, swimming with no clue which way leads to the surface. He’d do anything to protect Tia, but how can he, when she won’t even admit they’re friends?

As Tia learns the truth about who she is, and John stumbles closer to discovering her deadly secret, they’ll be forced to choose: their future, or their friendship.

Siren’s Curse is available on Amazon, iBooks, Nook, and Kobo. Check out This Is Indie, a free sampler containing sneak peeks at some of the most exciting books to hit your kindle this spring for an exclusive teaser of Siren’s Curse. Get it free from Amazon, iBooks, and Nook.