Candy’s music’s all over the place. From upbeat pop, rap, and EDM, to songs tinged with bittersweet longing and tragedy… She’s a wild card. You never know quite what you’ll get, since it’s whatever feels fun to her in the moment.

Candy knows what she’s doing, and her music reflects that. Powerful women stalking their prey, and dancing without a care. She can be out of control or brazen at times, but that’s part of her charm.

END_OF_DOCUMENT_TOKEN_TO_BE_REPLACED

I’ve been so swamped with new stories, I’ve gotten behind on sharing playlists and such with you guys! Starting with Lia’s.

Lots of classic rock, and a handful of newer songs with an updated classic rock vibe. Lia doesn’t try to play to current tastes- she picks the stuff that makes her customers feel young. If she gets a younger DJ, it might take a little negotiation to get a fuller playlist for a busy night shift, but her songs will be a respite for older guys who’re put off by all the pop and rap stuff. And there’s money to be made in that.

END_OF_DOCUMENT_TOKEN_TO_BE_REPLACED

Athena’s music… Sometimes pop-y, sometimes EDM. Very upbeat and attention getting, which is a little surprising for such a shy woman.

END_OF_DOCUMENT_TOKEN_TO_BE_REPLACED 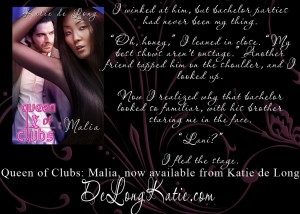 END_OF_DOCUMENT_TOKEN_TO_BE_REPLACED

Okay- so a dancer’s playlist is a very personal thing.  Sometimes, it strikes a balance between her persona and her clients- grown men don’t want to listen to Taylor Swift, no matter how confident her music makes the dancer feel- and sometimes it’s something that says a lot about the dancer.

Cora’s music is slow, sexy, and sometimes at odds with the club’s playlist.  But it’s perfect for a night at home, with low lighting.

Of course we would begin with those two, since they’re her first set ever, and such a memorable one, at that. But it goes on.

Lovage Strangers On A Train

What’s on your dream playlist?