Following the cover reveal for Inkubus’s new cover, here’s Reaper! I’m a sucker for colors, so the newer, brighter ones had me from the start! 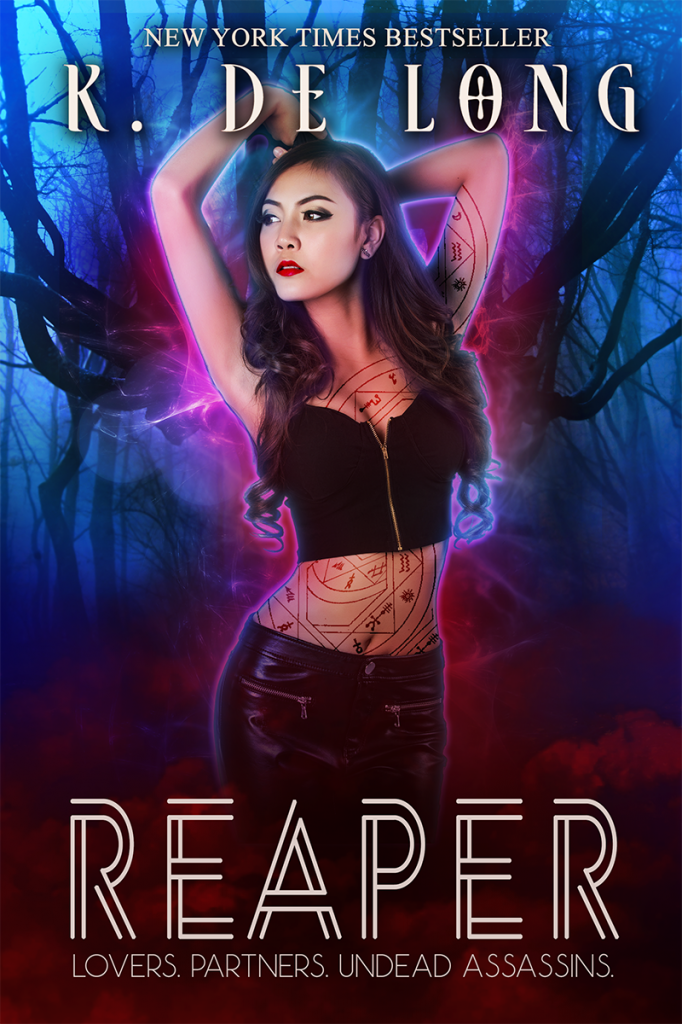 Sickness is a funny thing. Sometimes one task will be all but impossible, and you’ll have to shift to do something else. And even tasks that are both “creative” pull different things from the brain. Case in point, I can’t write while I have a migraine… but I can handle Photoshop. Go figure.

I tell you this because part and parcel with the pretty updated formatting I’ve been working on are pretty new covers. You can’t stare at the same piece of art for years without periodically getting the urge to try something different.

So that’s how the Inkubus series ended up with a whole new series of covers. If you follow me on Facebook, you may have seen me sharing these already. But just in case…. taadaaaa! 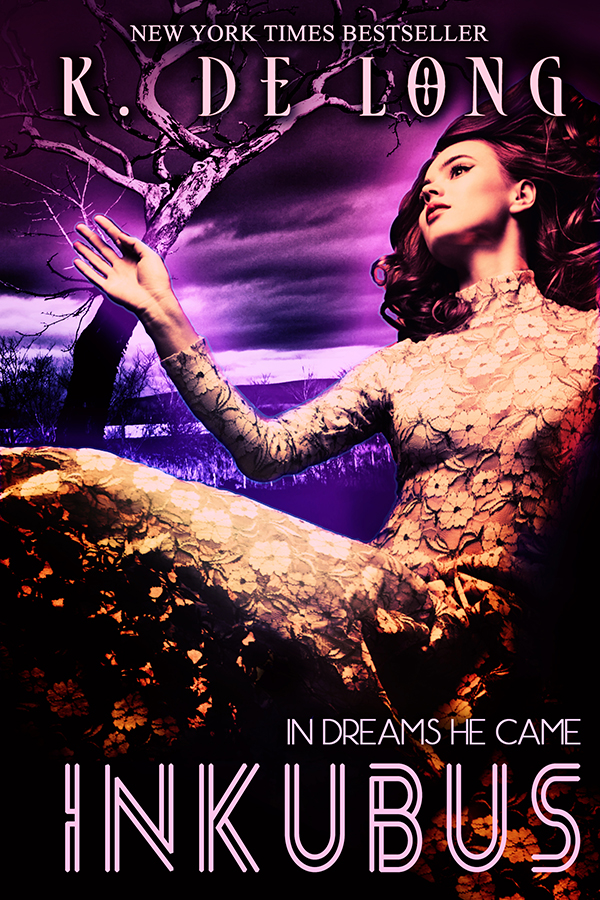 I’ll be back soon with the covers for Reaper, and Chameleon, and maybe I’ll even show off a few cards from the de Long tarot. I’m still moving slowly from August’s surgery, and am still pretty sick, so you’ve got some time to catch up on your TBR list while you wait for new books from me.  And with so many awesome new books coming soon- (Any Lili st. Germain fans waiting for Gun Shy?) that list’ll be full again soon enough.

Next up, the new Reaper cover!

As some of you may have noticed, I’ve slowed down on publishing books in my main Inkubus series. It took me a while to come to terms with why I was dragging my feet, but now that I know, it’s time to ‘fess up.
Those of you who’ve read more than one of my books know how much I love a good setting with vibrant characters whose interactions are fun even outside of their own romances. I prefer to create one world, and play out lots of conflicts within it, as old characters make cameos and throw wrenches into new characters’ plans.
So with each book in the main Inkubus series pushing that central conflict forward, I realized that if I wrapped it up too soon, I was gonna miss out on telling a lot of other stories while it’s raging its hottest. (No pun intended).
And that would have wrecked me.
With that in mind, I’d like to introduce you to two new series in the Inkubus universe.

First up, Born in Blood, which will kick off in June with Siren’s Curse. Born in Blood follows Detective John Camden of Reaper fame, and his tough-talking only-a-friend-no-really leading lady Tia. Secrets, lies, and a curse that could claim their lives.
Siren’s Curse (Born in Blood #1) is available for preorder on Amazon, iBooks, Nook, and Kobo. You can also catch a sneak preview of it in This Is Indie, a free sampler containing sneak peeks at some of the most exciting books to hit your kindle this spring. Get it free from Amazon, iBooks, and Nook.

Next up, coming some time after Siren’s Curse releases, Fly Away Angel, which will begin with Born Sinner. Fly Away Angel is an extremely dark romantic urban fantasy series following an ex-con and her frenemy trying to elude a murderous cabal of demons. Intrigue, repentance, and an answer to the question most of us hope we never have to ask: how long must someone suffer to become the best version of themselves?
Both of these will be multi-book series that are a little more Urban Fantasy-heavy than the main Inkubus series. They follow a single couple- not a new couple each book. You’re gonna get your HEA, and read lots of delicious smutty sex besides, but they’re more of a slow burn.
There’s more to come after that, but those are the two I’m cutting my teeth on. I intend to continue publishing Inkubus books as needed depending how these series move the overall world’s conflict forward. But that’s why you haven’t seen Stalker yet.
I hope you’re as excited as I am by all this. If not, I hope you will be once you’ve checked out an exclusive sneak-peek of Siren’s Curse in This Is Indie, available free from all retailers. Get it free from Amazon, iBooks, and Nook.
Also coming up is the re-release of Alliance, and the release of more Mated in Hell. With my medical stuff getting in the way, I haven’t had time to line it up yet, however that will be coming soon, as well. I haven’t forgotten about Tessa and Liam’s ongoing wary circling.
So that’s the update on all of the magical love stories you can expect to see from my K. de Long penname this summer. I’ve also got Black Roses ongoing, under Tiger Tarantino, and am cooking up a host of new books, as well. Thanks for sticking with me! 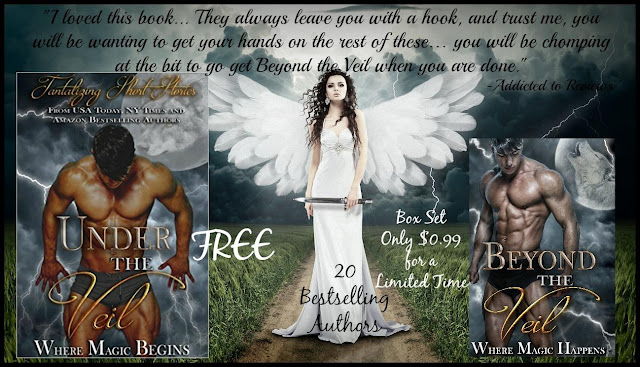 Beyond The Veil: Paranormal & Magical Romance Boxed
Set
(Under the Veil & Beyond the Veil Set 2)

Over 1 million words of riveting, sensual romance all in one place!

Alpha men and their sassy, head-strong and independent women heat up the pages of this steamy and engaging collection of books. Come check out the magic!
Limited time deal so grab it while you can!
Available at the following retailers:
Nook  iBooks  Kobo  ARe
Amazon US  Amazon UK  Amazon CAN  Amazon AUS
**Don’t forget to add to your *want to read* list on
Goodreads

Check out the Beyond the Veil Launch Party on Facebook

Join the USA Today, Amazon, International, and Award Winning Bestselling Authors of the books in Beyond The Veil for the collection’s launch!

Giveaways, games, and more with your favorite paranormal romance, dark fantasy, and urban fantasy authors. Come on by! 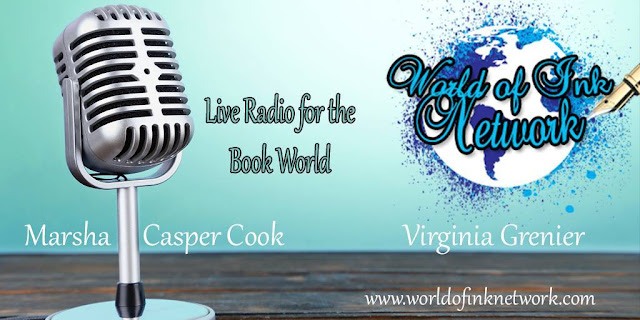 Beyond the Veil Authors on Blog Talk Radio

After the party, come join some of the authors on The World Of Ink Radio Show: A Good Story is a Good Story with Host Marsh Casper Cook as we chat about our inclusions in the boxed set, share a little bit about ourselves, and even read some steamy excerpts for your listening pleasure!

Link to listen in on the show: http://www.blogtalkradio.com/worldofinknetwork/2016/04/06/naughty-nights-is-back-with-a-new-box-set 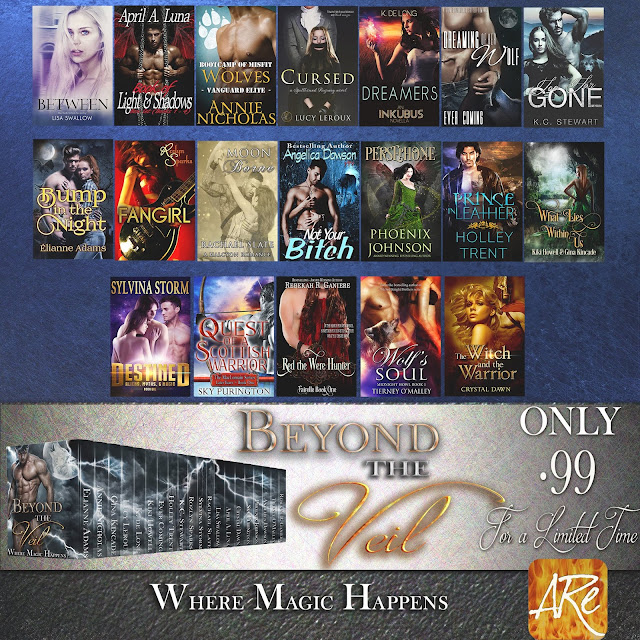 Don’t miss out on the FREE

Under the Veil: Paranormal & Magical Romance

(Under the Veil & Beyond the Veil Set 1) 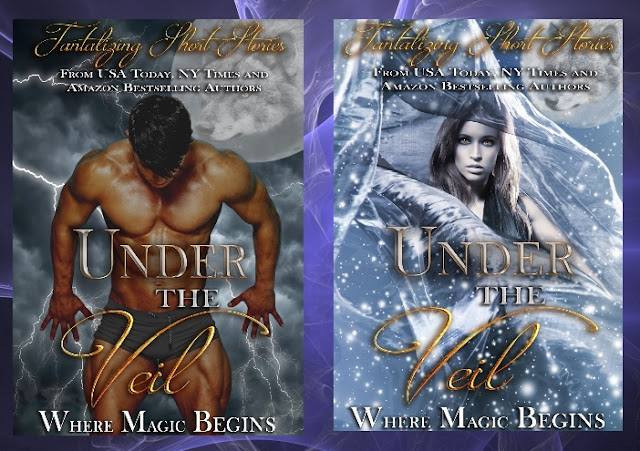 Under the Veil is ‘Where Magic Begins.’
From the 20 USA Today, International, and Award Winning Bestselling Authors of the Beyond the Veil boxed set, we start you off with steamy, magical & paranormal romance short stories to introduce our characters and whet your appetite, leaving you panting for more.
ARe  Nook  iBooks  Kobo
Amazon US  Amazon UK  Amazon CAN  Amazon AUS
Enter to Win
a Rafflecopter giveaway